I’ve just left the Slimming World group meeting after having been weighed. It isn’t good news. I have put on a pound this week & I am now half a pound more than what I was when I started. This certainly wasn’t part of the plan. When I joined, someone advised me to write down in my diary the weight I would be if I lost 2lbs a week, every week. Great idea! Only my diary currently shows that I should be at 12 stone 3lbs & not the 13 stone 8lbs I weighed in at tonight. Hmmmmm.

Reflecting on my previous post though, I feel able to put this into perspective. My weight does not define me (**note to self, repeat this 3 times in the mirror each morning**). I’m not feeling too deflated either, although I’d be lying if I hadn’t thought ‘aaaah stuff it I’m off to get a pizza’ after stepping off the scales. The fact of the matter remains that I need to lose weight and I need to tighten things up a bit. Funnily enough, I was only talking to my friend a couple of hours ago, telling her how confident I was that I would fit into my size 10 bridesmaid dress in May. Yes, I do mean May next year. It would therefore appear that I need to tighten things up a LOT. And sharpish.

I have got into a bad habit of starting my day with a Curly Wurly and although this treat is ‘allowed’ on Slimming World, perhaps the second one I have after lunch isn’t working out for me. I’m not sure that eating this at 8am sets me up well for the day either so I’m going to work on that too. It’s become part of my routine; driving to work and eating a Curly Wurly on the way but I’ve just replaced one bad habit with another. I’ll share more about that in my next post. Another embarrassing story!

Tonight at Slimming World was the early Christmas buffet event and I’m sure I’m not the only one who finds buffets a bit overwhelming. I usually go round with a plate in my left hand and use my right hand to pick up two of each items; one to put on my plate and the other to shove in my mouth. It’s kind of standard buffet behaviour though isn’t it?

I remember watching a documentary on tv a while ago called ‘What’s The Right Diet For You’? People who over eat at buffets were known as ‘Feasters’. I could relate to that, although feasting wasn’t restricted to buffets in my case. Underpinned by years of research, I sat down feeling confident that this programme could help me to identify the reasons why I was over eating and like those taking part, I would be fixed up with an appropriate diet plan in no time. They categorised 75 people in the experiment into 3 groups; ‘Emotional Eaters’, ‘Constant Cravers’ and ‘Feasters’. It was at that point in the programme that I knew I was utterly screwed. I, of course, fell into every god damn category on offer. I even went as far as taking the online test only to have this confirmed on there too. I came out as a ‘bit of everything’ which would go a long way to explain why every ‘diet’ I had tried had failed. 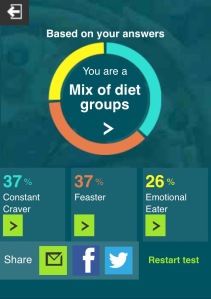 So I have my work cut out because it’s becoming increasingly apparent that maybe the diets aren’t the issue. Back to my last post; it’s about the story I have created for myself and the habits I have become accustomed to for so long. I think they say it takes 21 days to break a habit so I’ll pick this post back up in 21 days time and see if the old Curly Wurly on the way to work is still an issue. Wish me luck!

2 thoughts on “Curly Wurly’s are not my friend”

© [Sally Deakin] and [Chub Rub Diaries], [2015]. Unauthorized use and/or duplication of this material without express and written permission from this site’s author and/or owner is strictly prohibited. Excerpts and links may be used, provided that full and clear credit is given to [Sally Deakin] and [Chub Rub Diaries] with appropriate and specific direction to the original content.
%d bloggers like this: